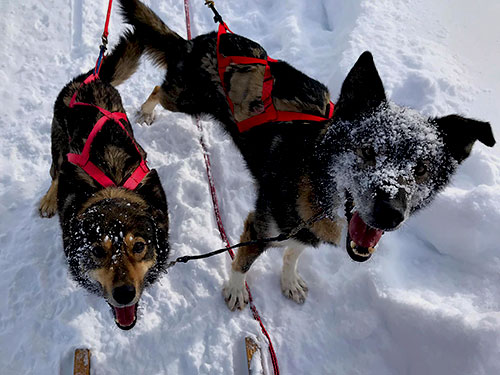 Chilly Dogs Sled Dog Trips is primarily a retirement kennel for Alaskan Husky racing sled dogs. The Alaskan Husky is not a pure breed, but rather, a diverse breed that varies in size, shape, and color. It is considered a “working breed”, but if you love what you do, it’s not work. Alaskan Huskies love what they do! To them it’s just happiness, teamwork, accomplishment, and satisfaction. This amazing breed may run further in their lifetime than any other animal on the planet!

When a sled dog is getting toward the end of its first career on a racing team, it may not be able to do the miles or speeds of which the younger dogs are capable. The two-legged team member (also known as the musher) might decide to send the dog to our kennel, if he/she thinks this would be a good fit for that dog. Mushers are always working together to find the best situation for every individual dog. A move to our kennel, means that these former racing dogs will get to keep running at a schedule that works best for them, providing both physical and mental stimulation as they age. Because of this, the dogs here live long and healthy lives, typically into their early to mid-teens, while still getting to do what they love most.

Scroll down to keep reading about our amazing dogs! 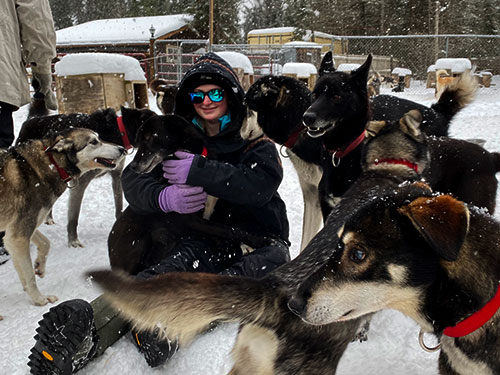 The name Chilly Dogs Sled Dog Trips is worded in a way that implies the trips are for the dogs….which is totally true! It’s the dogs’ trip—you are just going along for a ride, and they are proud to show off what they do. When it comes down to it, we just facilitate their passion, so that they can keep doing what they love. And we share that passion with them. It’s very contagious. Come see for yourself and feel the energy as you hold onto that handlebar right before your team launches!

Alaskan Huskies are common in distance racing because of their endurance, health, and longevity, among other things. They are by far the most common breed in racing, but as we said, it’s a very diverse breed. And when we say distance races, we mean anything from 30 miles, to a few hundred miles, to even 1,000-mile races.

We are “primarily” a racing retirement kennel, but a few dogs here have never raced. A couple were raised here from birth. Occasionally, we get young dogs that are not on a racing team yet but will be in the years to come. However, most of the dogs that call this place home are accomplished racing athletes that are middle-aged on up.

Sometimes people assume that a sled dog’s reward comes when they get back from a run; however, their main rewards are the feeling they get running with their friends, and every mile that passes under their paws. They thrive on it. No reward we can give them can top that. They know they are going to be fed, cared for, and loved, whether they ran that day or not. They don’t do it for a reward from us. They do it, because it is what every fiber of their being is telling them to do, and what every ancestor in their bloodline is howling at them to do. They do it, because it’s in their nature and culture—a culture that is one of the oldest dog cultures in the world. We get to be a part of that culture, and so do you! 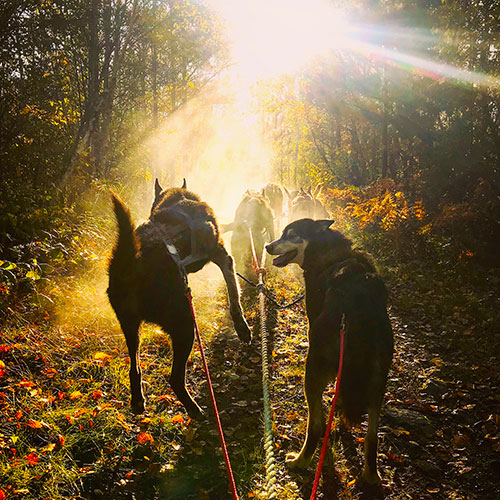 We often get asked if we know all of the dogs’ names...Let me tell you what we know. We know their personalities, ages, weights, family relations, life history, running preferences, harness size, strengths and weaknesses, abilities. Where they like to get scratched...
We can hear a dog bark and know who it is...
We know who jumped up on our back by how it feels.
We know a dog in the distance by the glow of their eyes from a headlamp.
By their tracks in the snow.
We know the sound of a certain dog’s gait as they approach from behind.
Or the sound of the dog’s breath.
We might even be able to recognize whose poop that is, or know the quirks of the great grandparent of the dog.
We have a bond built on mutual respect that runs so deep that the dog will blindly trust your command to turn into a bay with water on top of the ice. A bond where we will blindly trust the dog to navigate through the safest routes. A bond where when a dog is in your arms in his final hours at the end of his long and fulfilling life, he still has nothing but love, trust, and respect for you, and that feeling goes both ways. A bond where even though the dog has been gone for a number of decades, we still can talk about them like they were here yesterday, because the memories are that strong, and we still see the impact that that dog left on the other dogs in the kennel by how they act, and we sometimes see it in certain leading skills learned from that dog.

Oh, and yeah, we know their names.